Blog Tour: Any Boy But You by Julie Hammerle 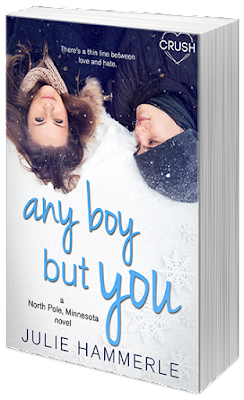 Any Boy But You

Summary:
Elena Chestnut has been chatting with an anonymous boy late into the night. It’s a very You’ve Got Mail situation, and she has no idea who he is. He can’t be Oliver Prince, hot-and-bashful son of the family running the rival sporting goods store. Their fancy sales strategies are driving Elena’s family out of business. Elena’s mystery boy has teamed up with her in their latest sales strategy, an augmented reality game, to help her win the grand-prize plane tickets. Money’s so tight Elena’s going to miss senior year spring break with her friends if she can’t win this game.

The girl Oliver's fallen head-over-heels for online had better not be Elena Chestnut. She's his angry, vindictive Latin tutor, the daughter of his dad’s business rival, and the one girl he’d never even think of kissing. She’s definitely not his online crush, because that girl is funny, sweet, and perfect.

When Oliver asks to reveal their names at the Valentine’s Day dance, their IRL relationship will either ruin what they have online, or they’ll discover just how thin the line between love and hate really is.

Disclaimer: This Entangled Teen Crush book contains swearing, snowball fights, and sexual tension that could melt the North Pole. Read at your own risk.

Julie Hammerle is the author of The Sound of Us, which will be published by Entangled Teen on June 7, 2016. Before settling down to write "for real," she studied opera, taught Latin, and held her real estate license for one hot minute. Currently, she writes about TV on her blog Hammervision, ropes people into conversations about Game of Thrones, and makes excuses to avoid the gym. Her favorite YA-centric TV shows include 90210 (original spice), Felicity, and Freaks and Geeks. Her iPod reads like a 1997 Lilith Fair set list.

She lives in Chicago with her husband, two kids, and a dog. They named the dog Indiana. 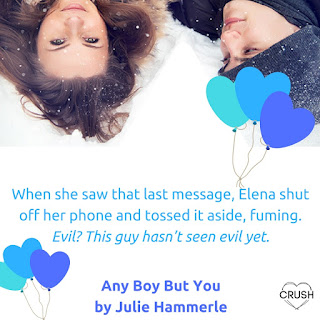 SWOON!
A winter romance with a super cute heartthrob and a game that rivals pokemon. So what's not to love?

The character building is done well for the MCs. For the support cast it's not bad but they feel a bit cliche and flat in compare to the MCs. Not to say that I didn't like North Pole or it's inhabitants. The support cast, though cliche is quite alright, just in compare to the brilliantly written MCs, they feel a bit flat retrospectively.
I totally adore Elena and Oliver. I could related to both of them. Enjoyed both POV and more than that their chemistry felt real. Their bickering and banter was really entertaining, I totally swooned for them!
Elena and Oliver are so different, they both deal with life differently. It's interesting to see how they each see the same situation.

The story line is the classic rom-com/hallmark kind. And while some of it is a tad, well cliche. I couldn't care less. Because this has all the swoon and cuteness a girl could ask for.
There were quite a lot of dramas thrown in and a bit of mystery, which I actually quite enjoyed.
The only reservation was the end for me. It's too hallmark for my taste. There was this huge build up... and then boom. All is solved. HEA. The end.

This is the first book of Hammerle I've read and I thoroughly enjoyed her writing style. While I have a bit of an issue with the way the end went, I felt all the anticipation, heartache, giddiness and happiness she put into this book. I think she excelled at putting me into the MCs frame of mind.
I can't wait to read more of her works

I read this in one sitting, it was captivating and entertaining.- it's a great cute&fluffy! All the swoon, all the cuteness and definitely a must read.
When is the next book coming out?

Oh and who wishes they had access to the game as well? 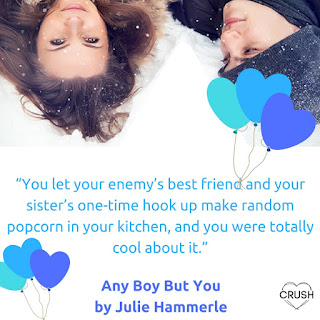 Tour Schedule with interviews and guest posts can be found here