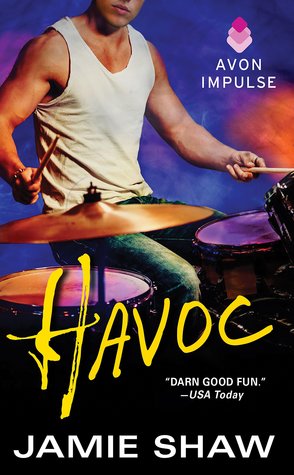 When Hailey Harper left her family farm to enroll in veterinary school, she had a plan: keep her head down, ace her classes, and most importantly... don’t upset the uncle paying her tuition. Translation? Don’t piss off his dramatic, self-absorbed daughter, Danica, even if she’s a nightmare to live with.

Falling in love with her cousin’s rock star ex-boyfriend was definitely not part of the plan.

As the drummer of a now-famous rock band, Mike Madden could have any girl he wants. He’s sweet, funny, romantic, talented—and the only guy that’s ever made Hailey’s heart do cartwheels in her chest. The more she gets to know him, the harder she falls, but Hailey knows they can never be more than friends… because Danica wants him back, and she’ll fight dirty to win.

Mike is falling for Hailey too, but Danica’s threats and his rock star life—music video shoots, international tours, obsessed fans—could tear them apart before they’ve even begun. Hailey isn’t sure she’s the one for him, but Mike’s waited years for a girl like her… and he’ll do anything to prove it.

Havoc might be my favorite book in the series... maybe.
Actually, I am not sure. I love all of them!
But I DO know for sure Mike is my favorite band member. I loved him right from the beginning and this cemented it. He is swoony awesome hotness.

Mayhem thrives on character building. All the books in the series are mostly character driven. Shaw is brilliant at building interesting unique characters. Havoc being no exception. Though saying that, I can't really get over Danica. She is the WORST. And not only because she is really spoilt and all that. But because Shaw might have overdone her a tad. Add to that Hailey and her dilemma and I found myself annoyed at best. Their tension, while in the beginning kinda interesting and all became too over the top at the end for my taste. And that is the only reason this isn't 5 Stars.
Because the rest? Bloody AWESOME!
I felt like I knew Mike fairly well, I mean he featured in the three previous books. But as I read I kept discovering more about him. Shaw did a brilliant job at creating complex characters that feel real. Same with Hailey- she is actually so different from myself that I found it hard to understand why she would behave in certain ways. But I did get her. Even if I personally would never have reacted that way, she felt authentic and real, which made her actions realistic.

I totally adore the romance, the cute moments, the problems, the atmosphere, the entire support cast (except Danica) and MIKE. The plot is entertaining. Plenty of ups and downs- and even if I think Shaw took Hailey's dilemma a bit far. I enjoyed every moment of it.

There are some beautiful description in this book. The pond scene - I felt like I was there and in the rain scene I practically could smell and feel the rain. So so beautiful. Shaw's prose is amazing!


A beautiful romance, hot rockstars, fabulous interesting females and lots of swoony moments makes this not only a must read book but an absolutely must read series.
And frankly I am so sad it is over, I am actually planning on re-reading the first 3 books... just to get my swoony rockstar fix
I can't wait to see what Shaw is writing next!