Blog Tour: Weddings, Crushes, and other Dramas by Emily McKay

Weddings, Crushes, and other Dramas 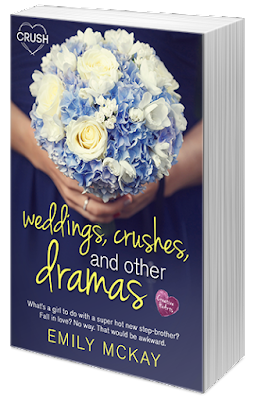 Falling in love with the best man wasn’t on the program.

Willa is happy to be the maid of honor in her dad’s upcoming wedding to uber-celeb Mia McCain. Not as happy about the best man being her soon-to-be stepbrother, the infuriating—and infuriatingly gorgeous—Finn McCain. Every time their paths cross, the attraction simmering between them grows a little harder to ignore. Willa knows all about guys like Finn—they only want what they can’t have. What’s between them isn’t real.

Finn has never felt anything more real than what’s developing between him and Willa. Sure, her dad warned him to steer clear, but it’s not just about forbidden temptation. He’s determined to prove to Willa he’s not going anywhere—and that happily-ever-after will always be worth the risk.

Disclaimer: This Entangled Teen Crush book contains a wedding so crazy it’ll make you laugh, a stepbrother so hot he’ll make you swoon, and a heroine so real she’ll make you cry.

OTHER BOOKS IN THE SERIES: 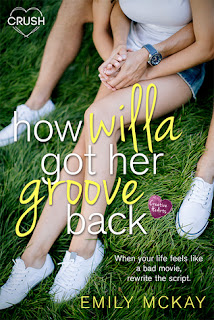 Disclaimer: This Entangled Teen Crush book contains an unbelievably hot bad boy, an unbelievably famous actress, and all the drama that comes with adding both to your family. Oh, and a forbidden flirtation with a soon-to-be stepbrother.
When Willa Schofer’s father comes home from a business trip with an über-famous new fiancée, Willa’s senior year blows up in paparazzi-fueled flames. Overnight, she has a new house, a new car, and a new soon-to-be stepbrother—the unbelievably hot, unbelievably arrogant, Finn McCain. Thank god he’s constantly pushing her buttons, or she might do something irresponsible. Like fall for the jerk.

Just when Willa’s decided to avoid him for, oh, ever, Finn lands in the center of her senior project team. Seriously—how hard is it to shake a guy? At least her work on the project snagged the attention of the (second) hottest guy in school. He might only be into her because of her famous stepmom, and he’s not quite as exciting as a certain annoying housemate, but at least she’s allowed to crush on the guy.

Because crushing on your annoying stepbrother? So not cool.

Emily McKay is a life-long fan of books, pop-culture and anything geeky. She has a black belt in Tae Kwon Do and baking cookies. When she’s not kicking-ass and scooping cookie dough, she’s watching videos from Screen Junkies (her favorite Youtube channel) or Pemberly Digital or Classic Alice. Okay, she has a Youtube problem! She’s seeking help. Really. Though, she may also have a slight problem with procrastination.

When the internet is down and there are no chocolate chips in the house, she does write books – everything from Harlequin romance novels to post-apocalyptic YA. Though her interests may appear broad, the common denominators are swoony heroes and snarky humor.

OMG!
What a rollercoaster.
McKay had me eating out of her palm.
I actually expected way more dramas, with the title but also after the first installment. But actually there are dramas, but they not like DRAMAS. Rather Finn and Willa have more internal dramas than anything else. And that affected me way more than their battles or any other teenage drama McKay could have thrown at me.
Weddings, Crushes, and Other Dramas is in my opinion completely character driven.
I mean the plot kept me interested. But frankly the thing that I love about this book: character building. McKay did an amazing job. Not only did she totally endear Willa to me this time around. Finn got more depth and had plenty of character growth as well. Both MCs transform, enough to make a huge difference but not too much to feel fictitious. Their attraction always was huge, but in this installment it gets depth. Gone is the insta-lust. Friendship and genuine care take over instead. Don't misunderstand me, there is plenty of frustrating und fulfilled chemistry. In fact brace yourself for it. 75% of the book before there is some leeway. And I mean some... it takes basically the entire book to get ..somewhere.
The support cast is written well as well. In fact I much prefer each character in this book than in the last. It's like McKay went and added depth to each one of them. Even annoying shallow ones are more interesting for some reason.
As this is a multi-author series I love seeing characters from the other books written from a different POV. Let me just tell you, these authors do a brilliant job and connecting the story lines and the characters. Sure each couple is differently written, but the series feels so connected to each other, the characters are so well defined, that this feels like it was written by one mind. I am totally in awe of that! What a great collab! I imagine all the authors hanging out together, having coffee and plotting the next twist. I would love to know how they actually did pull this off for real.

Let's go back to the plot. As I said, there is a lot of waiting for it to happen here. Honestly I savored every moment. Not a minute to fast. The slow pace of the romance while frustrating was also brilliant.
My only little problem. The quick turnabout at the end. I mean the epilogue. I love it. Don't get me wrong. I do. But I was left with a gazillion questions. Also the Damien situation felt a bit hastened, but I didn't care that much.
The question is, are we left with a huge gap with loads of questions because the answers will be in another book? And the other thing I am wondering: Is there another Willa and Finn book?