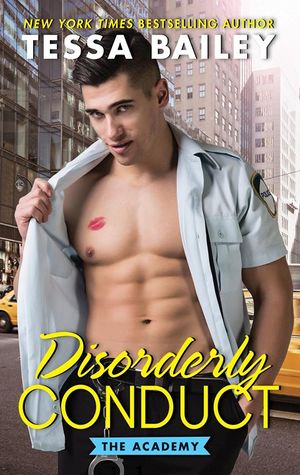 Police academy cadet Charlie Burns can’t believe his luck when the gorgeous blonde he meets in a bar murmurs those magic words: “Nothing serious, ’kay?” Mind-blowing, no-strings sex with Ever Carmichael—it’s the holy grail of hookups for a guy who’s too busy following in his law enforcement family’s footsteps to think about getting serious. Charlie’s all about casual…that is, until Ever calls it quits and his world tilts on its axis.

Ever knows that when you control the relationship game, you can’t get played. But for the first time, she wants more than short-term satisfaction. Step one: end her fling with commitment-phobic Charlie. Step two: sacrifice herself to the ruthless NYC dating scene. Yet everywhere she turns, there’s Charlie, being his ridiculously charming self. No online match or blind date compares to the criminally hot cop-in-training, but they’re over. Aren’t they?

If love is a four-letter-word, why does the idea of Ever seeing someone else tie Charlie up in knots? Now he’s desperate to win her back…and a little date sabotage never hurt anyone, right?

Okay. Let me be honest, I haven't really read that much by Bailey. If I say not that much, I mean I only read one other book by her.
And while we at it, when I started this, I wasn't really sure I was going to like this.
Because this is rather smutty in the beginning. (I know this is a good things for many of my friends but for me.. eh, not really. ) And very insta-lust.

But just as I thought, okay so maybe it's not going to be for me. Bailey throws in a twist and at 20% it all changed. I suddenly got invested. Suddenly the smut dials down and while Charlie does one stupid thing after the other I can't stop reading. I kept reading, while my insides were twisting, my heart was being wrenched out and shattered into pieces and then I was swooning and .. devastated because it ENDE. But then I was thrown a bone; the first chapter of the next book. But now?I mean.. what am I supposed to do now? Wait until the beginning of next year? (insert utter horror!) considers fake crying Ok, we all know I suck at any show of emotions.. so let's just leave it at Bailey has me wrapped around her little finger and I want more asap.

Charlie and Ever have both exasperated me to no end. I mean, I am miss commitment issues, but hello? they are so beyond that. I mean they have some serious - SERIOUS - commitment problems. It might be a bit much. In fact in the beginning, when they don't really know each other and the reader doesn't know them and all that is between them is a lot of fast hard smut, it feels too much. But then the story goes on, and I got to know them, I get their insecurities. I get where they coming from, but more I got their connection. Their feelings for each other feel real and deep.
The storyline is actually quite brilliant. It's the bootycall to friends to love kinda story. Set in NYC and with a great support cast. There are some funny moments and beautiful moments in there. And while I would never admit it, I loved the last scene. It's so John Cusack. Though, I would have never even liked it if it wasn't for the previous gestures.
It still surprises me how much I like the story and how caught up I got.

The characters are amazing. As I said, I felt like Ever and Charlie are going to be a bit of a cliche. And they started up as a big one. But Bailey added layers and layers of unique quirks to them and somehow now I am in love with both of them.
Charlie being a typical emotion-stunted dude, with a big heart and alpha protective streak while Ever is honest, generous and nurturing. The support cast is intriguing as well. I can't wait for Jack's and Danika's books.
Which brings me to the good news: There will be two more books. Jack's book is next.

And here are the bad news: the release date is scheduled for January, 30th. 2018! yep 6month away!
I guess I will go and read all those books by Bailey I neglected until now.