ARC Review: It's Hard Out Here for a Duke by Maya Rodale 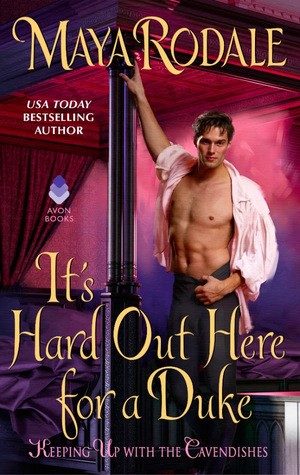 It's Hard Out Here for a Duke

In the fourth novel of Maya Rodale’s tantalizing series, a newly minted duke spends one night with his perfect woman...but can he win her for a lifetime

When American-born James Cavendish arrives in London tomorrow, he’ll become the Duke of Durham. Some might be ecstatic at the opportunity. Not James. He’s a simple man, fond of simple pleasures. And right now, nothing could be more pleasurable than spending his last night of freedom with a beautiful stranger.

Are Far Too Good…

One wild night, Meredith Green, companion to the dowager Duchess of Durham, said yes to a man she thought she’d never see again. Suddenly, they’re living under the same roof, where Meredith is expected to teach James how to be a duke—while trying not to surrender to temptation a second time.

For a duke and a commoner, marriage would be pure scandal. Yet nothing has ever felt as right as having Meredith in his arms…and in his bed. Soon he must choose—between a duty he never desired, and a woman he longs for, body and soul…

Sooooo, I kinda wish I liked this better. Because this is well written.
I liked Rodale's writing style, a lot. It's Hard out here for a Duke has her hallmark wit, some cute banter and yet, it lacked something.
The plot was a bit slow for me. The romance had too much hot and cold going on as well.
I considered to DNF several times. But then I kept hoping that it will get better.
And it did, a little.

The thing is I was totally underwhelmed by the MCs. I found James okay, mostly. He was a bit whiny in the beginning. Meredith was exasperating, pushing him away, then reeling him back in... But the thing is I didn't get their chemistry. I mean I liked James growing feelings, except I kinda didn't get why or when he got them. It made not much sense to me because I didn't feel their chemistry at all.
And there lies my problem with this book. It misses the spark, at least for me.

However, I also have to say, that this could easily be chalked down to an its-me-not-the-book case and lovers of the author and the genre should give this a try.