Blog Tour: The Right Kind of Rogue by Valerie Bowman 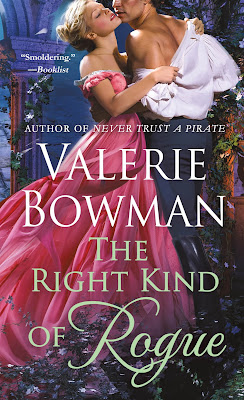 The Right Kind of Rogue

Can two star-crossed lovers come together―until death do they part?

Viscount Hart Highgate has decided to put his rakish ways behind him and finally get married. He may adore a good brandy or a high-speed carriage race, but he takes his duties as heir to the earldom seriously. Now all he has to do is find the right kind of woman to be his bride―ideally, one who’s also well-connected and well-funded. . .

Meg Timmons has loved Hart, the brother of her best friend, ever since she was an awkward, blushing schoolgirl. If only she had a large dowry―or anything to her name at all. Instead, she’s from a family that’s been locked in a bitter feud with Hart’s for years. And now she’s approaching her third London season, Meg’s chances with him are slim to none. Unless a surprise encounter on a deep, dark night could be enough to spark a rebellious romance. . .for all time?

VALERIE BOWMAN grew up in Illinois with six sisters (she’s number seven) and a huge supply of historical romance novels. After a cold and snowy stint earning a degree in English with a minor in history at Smith College, she moved to Florida the first chance she got. Valerie now lives in Jacksonville with her family including her mini-schnauzer, Huckleberry. When she’s not writing, she keeps busy reading, traveling, or vacillating between watching crazy reality TV and PBS. She is the author of the Secret Brides and Playful Brides series.

The Right Kind of Rogue had the right kind of mixture of playful and cute with a dash of exasperating which made this a fun read.
Being the 8th book in the Playful Brides series. Each book can stand on it's own, which I really like. There are several characters, who reappear however. I haven't read all of the books yet. I will most likely read them all at some point.
The main one in this book is Lucy Hunt, Duchess of Clarington (from Playful Brides #1). I do like her, though she is terribly meddlesome. And frankly while I find it funny and entertaining to read, in this issue I just wanted to tell her to back the hell off.

The storyline is kinda (okay pretty much) predictable, it the same as many historical romances with this type of heros. And I found myself exasperated with the MCs at times, especially Hart. But all in all I did enjoy it, not matter how cliche or exasperating.

My only issue is that Hart was a bit spineless.. and I wanted to shake some action into him. He behaves like a spoilt child half of the book. I couldn't really see what Meg saw in him at first. I did change my mind about him and most of all I enjoyed their chemistry.
Meg is sweet and very likable. She has integrity and is very loyal. She made reading the book a pleasure.

I should mention that these books aren't historically very accurate. But for me this doesn't really matter. They are my historical cute & fluffy romp, well written and thoroughly entertaining.

Looking forward to the next installment, which will be about Grimaldi (woot woot)
Sadly it's due only in May 2018 - guess until then I can catch up with the rest of the books in the series...

1.Tell us about your newest release.

The Right Kind of a Rogue is a Regency retelling of Romeo and Juliet only with a matchmaking duchess, a destitute debutante, and a much happier ending.


2. How long have you been writing?

I began writing on June 3rd, 2007. I remember because I told myself that day that if I was going to try to write a book, I wouldn’t stop until I got published. I’m happy to report that I did it!

3. What authors or friends influenced you in helping you become a writer?

Lisa Kleypas is an author who has been a huge influence on me. I love her books. As for friends, I love Anne Barton, Ashlyn Macnamara, Erin Knightley, and Sara Ramsay. We all started together and they’re the best.

4. Besides writing, what other interests do you have?

5. Can you tell us what is coming up next for you?

I’m writing the next book in the Playful Brides series. There will be eleven total and I’m almost finished. It’s been such a fun series to write. Every book is based on a famous play.

6. How can readers connect with you online?

I’m online at www.ValerieBowmanBooks.com . I’m also on Facebook at https://www.facebook.com/ValerieBowmanAuthor and on Twitter at @ValerieGBowman. I also have a Pinterest page with pictures of the Playful Brides characters.

7. Who was your childhood hero?

I have to admit, I always wanted to be one of Charlie’s Angels. Or Marie Osmond.

8. Out of all your work, who is your favourite character and why?

Lucy Hunt, who is featured prominently in The Right Kind of Rogue, is definitely one of my favorites to revisit time and again. Her book is the first of the Playful Brides series and she’s a fun character to write.

9. Where does your inspiration for your books come from?

All sorts of things. Sometimes I wake up in the middle of the night with an idea. Sometimes I think of it when I’m driving. I’m always trying to pay attention to good ideas.

10. What three tips would you pass on to an aspiring author?

Join a writing group like Romance Writers of America. Read craft books and/or attend writing workshops. Find other writers. No one understands like they do.

11. If you were hosting a dinner party what three people would you invite? (They can be real/fictional, from any era)

12. What is your all-time favourite naughty but nice food?

13. How would you describe your style of writing to someone that has never read your work?

14. What are some of your writing/publishing goals for this year?

I’m writing a contemporary romantic comedy called Hiring Mr. Darcy. I plan to finish it by the end of the year.

15. Do you feel that writing is an ingrained process or just something that flows naturally for you?

16. Where would you spend one full year, if you could go ANYWhere? What would you do with this time?

Oh, I’d be over in England in a hot minute and I’d spend the entire year researching and enjoying the country. I love it there!

17. Can you share you next creative project(s)? If yes, can you give a few details?

The Playful Brides book I’m writing now is going to have a hot Bow Street Runner and a lady who wants him to do her a favor and take her virginity.

Copyright © 2017 by Valerie Bowman and reprinted by permission of St. Martin’s Paperbacks.