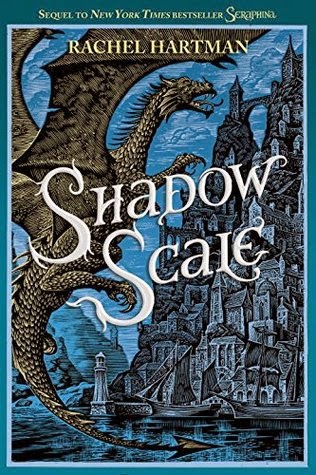 Seraphina took the literary world by storm with 8 starred reviews and numerous “Best of” lists. At last, her eagerly awaited sequel has arrived—and with it comes an epic battle between humans and dragons.

The kingdom of Goredd: a world where humans and dragons share life with an uneasy balance, and those few who are both human and dragon must hide the truth. Seraphina is one of these, part girl, part dragon, who is reluctantly drawn into the politics of her world. When war breaks out between the dragons and humans, she must travel the lands to find those like herself—for she has an inexplicable connection to all of them, and together they will be able to fight the dragons in powerful, magical ways.

As Seraphina gathers this motley crew, she is pursued by humans who want to stop her. But the most terrifying is another half dragon, who can creep into people’s minds and take them over. Until now, Seraphina has kept her mind safe from intruders, but that also means she’s held back her own gift. It is time to make a choice: Cling to the safety of her old life, or embrace a powerful new destiny?

Shadow Scale is a really difficult one to review for me. I am rather heartsore for two reasons:I had huge expectations and somehow they were not met,  the other being that this is a well written book, but  if you take a look at my rating, I didn't much enjoy it.
I adore Seraphina. I couldn't wait for it's sequel, I was convinced that there was no way that I wouldn't like it. But sadly though, I don't loath it, it just didn't work for me. It took me ages to pinpoint what it was actually. Because there are many things that are really good about Shadow Scale. So if you would add it all up this should be great, right? Uhm, wrong. And this fact actually made me think about what makes one like a book? What makes me, specifically enjoy reading one book and not the ohter? Before I go all geek philosopher let's take a look at this particular book.

The writings style is beautiful. It is just as I expected. Hartman is an extremely talented writer. Her prose at times feels like poetry. There is a great sense of humour to the characters, which made me smirk, there is a wonderful eye to detail when it comes to descriptions. I enjoy her prose and I am looking forward to hopefully many many more books from her.

The world building is exquisite. I adore the quirky and slightly weird world Hartman created. It's unique and really interesting. But there were times when the extensive world building felt more like being dumped on me than elegantly woven into the story, like it was in Seraphina. And while I adored Serphina's mental garden in the first book, for some reason it grated on me in this one. Why? I honestly don't know.  I thought about it and I can't explain why, only that it felt more and more tedious, made the pace of the story slow down even more. And at times I just didn't get why Hartman added it. It didn't add to the story, in fact I felt it distracted me. It just didn't work for me.

The character building is well done. Again, I didn't expect anything else. There is another rather big cast added to this one. And they were done meticulously. Maybe a tad to meticulous? It is just like in Serphina my favorite part of the book.

The plot is probably the biggest let down actually. This is slow. And I mean slow. Look Seraphina was quite slowly paced, there is a lot of world building, tons of details and character building- but I didn't care one bit. Shadow Scale on the other hand felt like a chore to read. It's way to slow paced for me. It took me ages to get into it, well actually I never really did.  Towards the end some of the things that happened were just not in character of the MCs, they made no sense to me. Which was rather annoying, then let's not even talk about the odd solution of the romance.... It just, well beyond unsatisfying? It made me wanna throw my kindle, actually. How did Hartman go from doing one of the sweetest love connections to just appalling?! Honestly I more than dislike the end of the series. It wasn't just disappointing, I mean I care for Seraphina, a great lot, I read over a thousand pages about her, and THAT end left her with what? What was the point of the journey exactly? I don't need a HEA but what was that? It's beyond depressing, it's worst case scenario on so many levels....

My biggest issue with Shadow Scale though: after reading Seraphina I had certain expectations. Which clearly weren't met. But I guess I could have lived with them... But the elements that I loved so much in Seraphina were no where to be seen in it's sequel. Namely the connection between Kiggs and Seraphina- gone. BUT most importantly the music. I adore Hartman's description of all the musical bits, Serphina's feelings, it's meaning to her... All of it. It's some of the most beautiful writing I ever read. In Shadow Scale there is nothing about Serphina's music - at all. It makes no sense to me, simply because it is supposed to be one of the most important things to Seraphina. Instead I was put through the tedious mind garden excersise- why chose that? I am not quite sure why Hartman went that way. All I know is that looking at the two books, both well written one- moved me to the core of my heart the other really didn't.

So what makes one like a book and not another? I guess this will be an eternal question with little answer. Some books just work for me, others just don't....But in the case of this series one spoke to my heart, the other just... well, it just didn't. So despite the great writing, the amazing world building and endearing character building- there was something missing in Shadow Scale-  a spark, something that resonates with me... And I can't tell you how much I wish it would have had it.