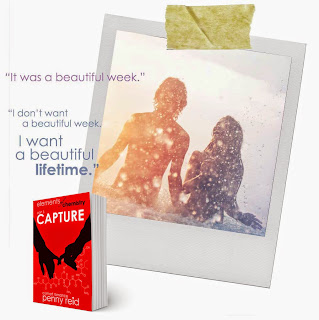 I am kinda speechless actually. Again. I mean I devoured this one. I read it in one sitting. And let me tell you... It is brilliant! It very very good.
I... welll... as I said. Me.... speechless.

Because how should I put to words what Reid did to my heart when I read this? I am not a writer after all...

So forgive the rather un-eloquent attempt to put to words what Reid has done here.
I think it is actually impossible to review this one as its own entity. Since the two previous sequels have kinda made me form an opinion on Elements of Chemistry. While I enjoyed Attraction, I was not sure this would be one of my favorites, I was convinced that Martin lacked depth...Then in Heat I changed my mind- completely.. I was totally and utterly won over. Team Martin ALL THE WAY. And then Reid went and blew every apart again in Capture.
Which is beyond amazing. I found my opinion of characters do a 180, again. My heart was shattered in Heat? Well in Capture Reid shredded those broken pieces to dust. I was so beyond devastated. And then she went about to slowly put it all together.

I really love the plot of this one. Well, clearly. But while I kinda knew what I could expect... Reid managed to surprise me. I was totally shocked by some of the things that happened. It's your romance with a great geeky twist.

If the character building was fabulous in Heat... This one.. well, it's genius. Somehow ALL my issues I had with certain peps in Heat, all my frustration was solved. Which would have made me happy either way. But again Reid went beyond my expectations and did it not just elegantly but so realistic. I not only believe the changes - I totally could see this work out in real life. Sigh. I well, again, I can't describe how touched and amazed I was by that.
Martin did the biggest transformation for me. I wasn't that sure how I felt in Attraction, then was totally taken by the broken and angry side of him but in Capture? Well, he is in my top ten book hotties after that. Not only did he change, but again, the changes are totally believable. Though to be honest, I was a bit flabbergast at times, felt like shanking him over the head- wondering where the pushy jock had gone. I mean it would have helped at times...
But talking about shanking: Kaitlyn? OMG. I wanted to shake her at times. But I so could relate to her. And I totally love how she got her spunk on. I adore that she in all of this, went and was honest to herself and not only grew so much, but found what was important to herself. Found somehow her own path.

That's exactly where Reid's mastery lies in my opinion. She is a wonderful writer. I love her prose, it's spunky, fun, geeky and clever. Yet, she manages to be sizzling, enticing and heartwarming at the same time. Capture not only encompasses all of this. But I swear she is getting better and better.
Looking back, after reading the entire serial, I am in total awe of Reid's mastery of her craft. Elements of Chemistry is masterfully constructed. It has a well thought out storyline, superb character building and then there are all the little details that just add up to a brilliant piece of work. The titles of the chapters? Clever. Then the three parts.. really brilliantly divided. So many things fall in place after one reads this. It's astounding.
Which brings me to the way this has been published. The serial format. While I dread the wait between the instalments- I am so glad I read this as a serial. The wait in-between somehow made this better. The way it was divided was so well done, that despite cliffies, which were at times painful to say the least, each part was more rewarding. Again this speaks in my opinion for Reid's immense talent.
The good news for all of you who don't like serials- all three parts have been publish and you can read them in one go!

So if you like new adult and romance novels- and you feel like a clever twist to your cute & fluffy : This should be on top of your TBR. Better go read it right now. I promise you won't regret it!

We all belong to ourselves, until we have children. Then our children lease us for a long as they want.


Why is that weird? Honestly it was kinda nice. We were both adulting like adult adults who behave like adults.


No. I have plenty of reason. But without honour and goodness, reason isn't worth much.


"Just because you don't like people doesn't mean you can go around treating them like crap. What is so hard about being nice?""It's time-consuming."

Love, I decided, is being a sidekick.