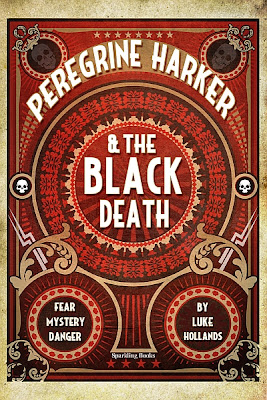 Peregrine Harker is about to learn you're never too young to die.

London 1908: A secret society stalks the murky streets, a deadly assassin lurks in the shadows and a series of unexplained deaths are linked by a mystery symbol…

When boy-detective Peregrine Harker stumbles across a gruesome murder he sparks a chain of events that drag him on a rip-roaring journey through a world of spluttering gas lamps, thick fog, deadly secrets and dastardly villains.

Every step of Peregrine’s white-knuckle adventure brings him closer to the vile heart of a terrifying mystery – the true story behind the Brotherhood of the Black Death.

This is a book for the boys. At least that's what I concluded at the end.
To be honest I just couldn't get into this one. At first I thought it might be my mood, so I read something else in between.. and when I came back to it, I still felt the same. So I kinda struggled through it.
See this is not really bad actually. Just not my cup of tea. The writing is kinda classic boy's adventure/fantasy. And I thought I liked those. But maybe not so much?
It's a bit silly and funny, fast paced and has every typical element a ya mystery/historical fiction usually boasts. All is there the undercover agent, bombs, fights, the big showdown and THE girl. Still I was always left feeling like something was missing.
I think my biggest issues were that Peregrine sounded way older- more like 30 or 40 at times not like a fifteen year old guy and I was hoping that there would be more plot or character development as it went on. But that never really happened. In fact both plot and characters felt more and more generic.

This felt more like one of those action spy movies to me and while I do watch those ones in a while, I think I don't wanna read books like that. Saying that though I also have to say that I am sure that many others will enjoy this more than me. As I say right in the beginning it think this one is one for the boys. The 15year old ones that secretly dream of being a undercover agent on dangerous missions and getting the girl at the end.