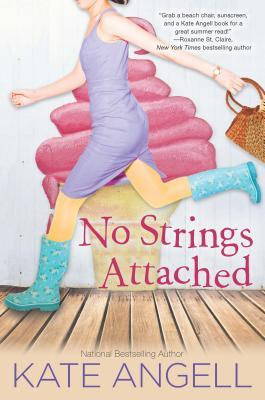 No Strings Attached by Kate Angell

As a professional volleyball player, Dune Cates attracts scores of pretty women who flock to his side. But only one has managed to get under his skin--Sophie Saunders. Unlike the skimpily-clad beach groupies, Sophie marches to a beat all her own. And though she's afraid of the surf, burns in the sun, has two left feet, that doesn't stop her from trying every daring sport available on the boardwalk. Dune knows Sophie spells trouble, and he should keep his distance, especially since he's a no-strings-attached kind of guy. But he can't ignore an overwhelming instinct to protect her. And with the promise of ice cream sandwiches, merry-go-round rides and dreamy sunsets, it's only a matter of time before Dune gives in to the temptation of Sophie's soft lips.

Love is always sweeter in the summer.

Review:
This book was a bit weird to read because it oscillated between 4 and 2 stars.

There is 2 love stories. The main one between Dune and Sophie and the secondary one between Mac and Jenna.

We met all the characters in the previous book (No tan lines). Dune and Mac are back to Barefoot Williams for a month vacation, they are best friends and Professional beach volley partners.

Sophie is a book worm, tremendously shy and with lots of phobia. One of those being she’s afraid of water. She also doesn’t stand sun so well, so each time she dares to go on the beach she is wearing hat, windbreaker and rubber boots. But this summer she decided it was high time to take some risks and emancipate herself from all her fears. She also has a crush for Dune since she was a kid.

Dune is attracted to Sophie and find her absolutely cute, but aware of her shyness he’s hiding his feeling for her. Because of that the romance is quiet slow to kick.

Mac and Jenna has a totally opposite relationship. She is as straight forward and sharp tongued as Sophie is shy and sweet, and externally she and Mac can’t stand each other.

My favorite character in the book is definitely Mac. He was part of most of the 4 stars moments of the book with or without Jenna. This man produces witty comebacks as naturally as he breaths.

The story was sweet but sometimes too sweet for me, thus the 2 stars moments. Another thing that also dragged the story in my opinion is all the "historical" moments.