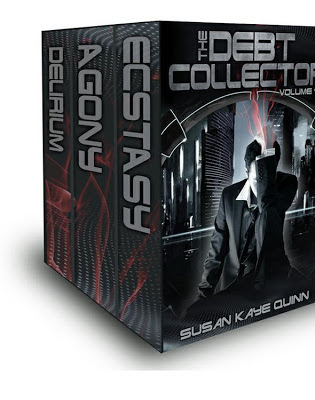 What's your life worth on the open market?
A debt collector can tell you precisely.

Lirium plays the part of the grim reaper well, with his dark trenchcoat, jackboots, and the black marks on his soul that every debt collector carries. He's just in it for his cut, the ten percent of the life energy he collects before he transfers it on to the high potentials, the people who will make the world a better place with their brains, their work, and their lives. That hit of life energy, a bottle of vodka, and a visit from one of Madam Anastazja's sex workers keep him alive, stable, and mostly sane... until he collects again. But when his recovery ritual is disrupted by a sex worker who isn't what she seems, he has to choose between doing an illegal hit for a girl whose story has more holes than his soul or facing the bottle alone--a dark pit he's not sure he'll be able to climb out of again.

The first three episodes of the Debt Collector serial are collectively the length of a short novel, or 152 pages. These are the first three of nine episodes in the first season of The Debt Collector serial. This dark and gritty future-noir is about a world where your life-worth is tabulated on the open market and going into debt risks a lot more than your credit rating.

Quinn had me hooked with the first episode of Debt Collector already and the following two episodes don't disappoint. The series is fast paced and deliciously dark. And while each episode finishes a chapter somehow- no huge cliffhangers so far. It leaves you wanting more!

The plot is fast paced and with many twists and turns, that left me wondering and guessing as what is next and who is who in this dark world.

The entire book is writing from Lirium's point of view. While I thought he sounded older in Delirium, in the following episodes his age showed. He is a young man, who has seen more than he should at his age, and Quinn writes him extremely well. He is reckless and tries to do the right thing, both actually qualities that makes him really likable. As we accompany him through a more and more entangled thread, more about him is revealed. I can't help finding myself routing for him, hoping he trusts the right people and somehow manages to fix things.
The support cast is interesting to say the least. Mostly I am still trying to gauge them. It's seems there is a hidden agenda everywhere and as the story unfolds different sides to the characters are revealed.

Most of the world building was done in the first episode. And as I said in my review of Delirium, it's really intriguing.  The idea of the debt collectors is ingenious, but Quinn takes it to a different level, by slowly showing the cracks in the society and slowly building a more and more elaborate picture of this futuristic world.

I really like that this is published in serial form. It's a fun idea! And Quinn has gotten it just right. She stops just at the right point, you given enough to make you wonder and wanting more but the wait is not too bad as well.
Well written, fast paced Serial! I'm looking forward to see what happens next.