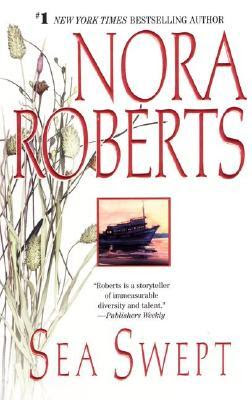 A champion boat racer, Cameron Quinn traveled the world spending his winnings on champagne and women. But when his dying father called him home to care for Seth, a troubled young boy not unlike Cameron once was, his life changed overnight...

After years of independence, Cameron had to learn to live with his brothers again, while he struggled with cooking, cleaning, and caring for a difficult boy. Old rivalries and new resentments flared between Cameron and his brothers, but they tried to put aside their differences for Seth's sake. In the end, a social worker would decide Seth's fate, and as tough as she was beautiful, she had the power to bring the Quinns together--or tear them apart...

“Don’t mix up who I am and what I am,” she told him quietly. “You have to be honest with me, or the rest of it means nothing.”

He was on his knees on the platform as he spoke, using his hands to show her. And still leaving her in the dark.
But it didn’t matter whether she understood the technique he described or not. She understood him. He might not realize it yet, but he had fallen in love with this place, and with the work he would do here.

This was at least my fourth read and I still absolutely LOVE this book.

The Chesapeake Bay saga is one of the best series written by Nora Roberts and is definitely one of my favorite. Each book has one love story but the general arc of the series revolve around ten years old Seth and the Quinn brothers relationship.

Three men, three brothers, three reactions. Phillip’s polished welcome, Ethan’s vaguely embarrassed nod, and Cam’s irritated scowl.
And there was no doubt each and every one of them looked outrageously male and appealing in sweat and tool belts.

“Makes sense”, Phillip agreed and, feeling better, he grinned at Cam. “You’re Mommy.”
“Fuck you.”
“That’s no way for Mommy to talk.”

Cameron Quinn is a successful champion boats racer, basking in the afterglow of his last win when he is called home to his dying father’s bed. Once there, dying Ray Quinn asks him and his two brothers to take care of Seth, the last damaged boy he was in the process of adopting.

“I’m counting on each of you. Ethan takes things as they come and makes the best of them. Phillip wraps his mind around details and ties them up. You push at everything until it works your way. The boy needs all three of you. Seth’s what’s important. You’re all what’s important.”

Once, all of them also were abused and troubled young boys, then Stella and Ray Quinn stepped into their lives and claimed them as their own. Not only they gave them a safe arbor but love, a family and, most of all, a life.

Cam is a rough-edged adrenaline addict, always on the go and even if it costs him immensely he’s determined to hold the promise he gave his father and give Seth a home. But quickly they realize that keeping Seth's guardianship is not the only battle they have to fight.

“I’m selfish, impatient. I go for the thrills because that’s what suits me. Paying your debts doesn’t have anything to do with having a good heart. I’m a son of a bitch, and I like it that way.”

Seth broke my heart but it was so beautiful to see him opens up to his new guardians/brothers and I loved his relationship with Cam.

“The kid's driving me bat-shit," Cam complained as he stalked into the kitchen. "You can't say boo to him without him squaring up for a fight."
"Mm-hmm."
"Argumentative, smart-mouthed, troublemaker."
"Must be like looking in a mirror."
"Like hell."
"Don't know what I was thinking of. You're such a peaceable soul.”

“You don’t want to get in the habit of overusing the word “fuck” as an adjective. You’ll miss the vast variety of its uses.”

Then there is Anna. She’s the social worker in charge of Seth's pending adoption. After Ray’s death she goes to meet with the Quinn brothers to evaluate the situation. She is a no-bullshit but warm, loving and passionate woman who takes her job seriously.

“You said you survived, Anna, but you didn’t. You triumphed. Everything about you is a testament to courage and strength.”

He could have denied it, could have taken the I-don’t-know-what-you’re-talking-about approach and done an expert job of it. But her eyes had the same effect on him as they’d had on Seth. They wouldn’t let his tongue wrap itself around a decent lie.

Their relationship was hot and fun and the scene where they declared their love to each other one of the best and funiest ever :D

Phillip could only close his eyes. “For God’s sake, you’re hitting on the social worker.”
“She’s hitting on me, too.” Cam flashed a grin. “I like it.”

Sometimes, she thought, you had to go with your instincts, with your cravings. At that moment hers, all of hers, centered on him.

The wanting was huge, ruthlessly keen, recklessly primitive. And for now, for both of them, it was all that mattered.