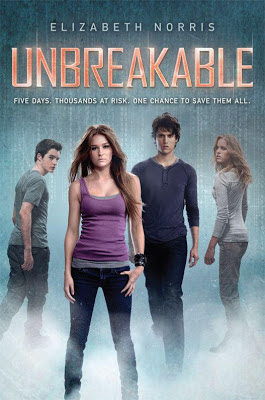 Publisher: Balzer + Bray
Series: Unraveling #2
Pages: 496 Pages (Hardcover)
Genre: (YA) Paranormal
Release Date: April 23, 2013
Summary:
Four months after Ben disappeared through the portal to his home universe, Janelle believes she’ll never see him again. Her world is still devastated, but life is finally starting to resume some kind of normalcy. Until Interverse Agent Taylor Barclay shows up. Somebody from an alternate universe is running a human trafficking ring, kidnapping people and selling them on different Earths—and Ben is the prime suspect. Now his family has been imprisoned and will be executed if Ben doesn’t turn himself over within five days.

And when Janelle learns that someone she cares about—someone from her own world—has become one of the missing, she knows that she has to help Barclay, regardless of the danger. Now Janelle has five days to track down the real culprit. Five days to locate the missing people before they’re lost forever. Five days to reunite with the boy who stole her heart. But as the clues begin to add up, Janelle realizes that she’s in way over her head—and that she may not have known Ben as well as she thought. Can she uncover the truth before everyone she cares about is killed?

If someone asked me to describe this book in a single word, I don’t think I’d be able to. I’d start by.. maybe, amazing? But then would it do the story justice? No. If I went by.. enthralling, it would be close to the mark but then you’d have to hear me gush about how engaging, terrific and emotional the whole plot was. You might say I’m biased because bring in worm holes, multiverses and interverse hopping and I’m more than game. (Ironically, those were the things that were a major turn off for me in Unraveling but this time around, I knew what I was getting into while I started this book.)

Unbreakable, like its prequel, doesn’t delve into too much shady business. It does keep you in suspense (more so if you read Ben’s novella), and it definitely never gets slow or predictable. However, unlike its predecessor, there is a heaviness to this book all throughout. Not surprising if you consider how we had Alex dying, Ben leaving and the whole word left in tatters after the almost Wave Function Collapse in the last book.

The story starts with Janelle and her friend Cecily trying to do something normal for all the people who have lost their homes and their hope after the disaster. Janelle is mostly bogged down with all that’s lost; however, it doesn’t stop her from helping as many people as she can, in whatever way possible. The way Norris has portrayed Janelle’s state of mind in the story is one of my favorite things about this book. There were moments when I felt that the author was indulging too much into what her MC was going through, but then I realized that if there was anyone in her place, having faced so much, it was only natural to be panicked, stressed, angry and frustrated at everyone but also quite extraordinary to be so strong-willed and brave in the face of such dire situations. And talk about dire situations! This book was full of it!

If you’re a fan of thrilling, action-packed novels, then brace yourselves, cause this book is going to throw it at you every which way. Right from the start, you have people disappearing from the face of the Earth. Literally! In the last book, you had a time bomb that was counting down to everyone’s demise. Here, you have a timeline, and the stakes are high grudgingly not higher than Unraveling and Janelle can lose everything.. even her own life, because.. well, IA is after her and she again has to save a lot many people, including herself.

I’m not going to ruin the book for you by giving out any spoilers this time. I’m just going to list the things that really bothered me now.

My first problem was with the multiverses. I’m not sure if I mentioned anything in my last review, but here, since there were many “Earths” that Janelle and Barclay traveled (oops..spoiler, you get to see a lot of Barclay in this book), I really can’t ignore it. I understand how we’re talking about parallel universes and different Earths that are either more advanced or backward than our current Earth in the story, but how do you expect me to believe that wherever these guys are landing, it’s habitable? I know, I know. Norris did try to show some Earths that were inhabitable due to radiation but seriously, that’s it? No form of life survives in those planets and you’re able to spend days there? And you get to eat berries that are edible? No deadly animals, no mutilated corpses, nothing to see but cockroaches? That’s mighty disappointing Ms. Norris. (Although, I wasn’t devastatingly disappointed because there was so much they were already going through. I understand why you chose not to add more complications. Oh and by the way, good thing you showed at least one place where people spoke a language other than English. I really wouldn’t have let that slide so easily.)

Second problem was with how Ben and Elijah, who were more or less the main characters in Unraveling, were nothing but forgotten side characters here. Even their awesome power was downplayed! Remember how Ben could heal people? I actually had to be reminded that he could do that. Nowhere in the book is Ben able to do that. Why would you make him so unimportant Ms. Norris? And not only unimportant but incapable, reckless and stupid too. The ending scene? (view spoiler)

Third problem err.. not really a problem, just tiny details that bothered me was how conveniently everything fell into place. Like a dozen times! Want me to point them out?

Case #2: How easy it was to get the drives from the Black Hole.

However, despite all my rambling silly nuances, I really enjoyed the book. I am actually surprised by how much importance the author gave to Barclay and I’m more surprised to find myself liking him a lot more than I ever liked Ben. He was smart, professional, arrogant yet considerate and if not for him, Janelle wouldn’t have made it; which brings me to my fourth problem. (view spoiler)

Other than that, the introduction of certain doubles in the story was quite a treat. Initially, I hadn’t thought of it, but after a few chapters, certain things became quite obvious. Still, there was a poignant edge to how it all played out. The ending was not fairy tale perfect because all the characters had been through a lot but I was glad to see Janelle happy and with her family in the end. I was obviously looking forward to read a little about what Cecily went through, but I guess cause it’s not her story, we don’t get to see it.

Anyhoo, that brings me to the end of my review. This book was not what I was expecting and it surprised me in a good way this time. Besides, it was a really fast-paced novel with character development for..some. (Wish I could say the same for all characters.)