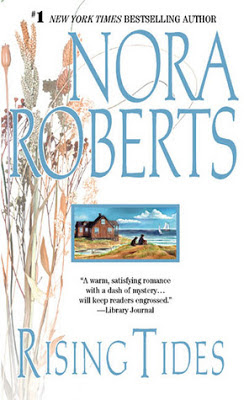 Of the three brothers, it was Ethan who shared his father's passion for the Maryland shore. And now with his father gone, Ethan is determined to make the family boatbuilding business a success. But amidst his achievements lie the most important challenges of his life...

There is young Seth, who needs him more than ever. And there is a woman he has always loved but never believed he could have. But beneath Ethan's seemingly still waters is a dark and painful past. He must learn to see around the shadows to accept who he is. Because through Ethan's past lies the future--and his one chance at happiness...

Ray and Stella had taken them in, three half-grown boys, all wild, all damaged, all strangers. And had made them a family.

Oh, my, Grace thought with her nose pressed up against the window. Oh, my. If she’d ever seen two more impressive examples of the male form, she couldn’t say when. She’d only intended to sneak a quick glance. Really. Just one innocent little peek. But then Ethan had peeled off his shirt and...

Another multiple re read I don’t tire of...

This book picks up where the first ended but the pace is different, matching the MCs personalities.

Ethan is a waterman. He literally breaths and lives the sea. Come hell or high water, everyday at dawn he is out on his fishing boat. He is the solitary of the three Quinn's brothers. The quite one. Contrary to Cam, he likes to think things thoroughly before making his moves.

“You were meant to be ours. Meant to be here. Took to the water like you’d been born in it. Cam, he always just wanted to go fast, and Phillip preferred to sit back and enjoy the ride. But you...”
He turned back again, his gaze thoughtful. “You studied every inch of the boat, every wave, every turn of a river. You’d practice tying knots for hours, and nobody had to nag you into swabbing the decks.”
“It came easy for me, right from the start.”

“Christ, you were a spooky kid, Ethan. Quiet as a shadow, deep as a lake.”

“And that smile. It takes, like, ten minutes for it to finish moving over his face, and by then, man, you are drooling.”

But, oh, he had a need, one that swamped him like a storm surge and left him floundering.

The gentler, sweeter emotion that shimmered from him was so calmer than that first whip of greed; it only gilded the edges of the yearning he’d stirred.

Grace is a young single mother. She is fiercely independent and working hard to built her baby girl a beautiful future, juggling with as many jobs as she can take. She had a sheltered childhood and it’s seems like she always was in love with Ethan.

“Because she’s rock-steady, pretty as a picture, patient as Job, and she’s got enough humor about life to tickle out yours.”

But the fact was, growing up, there had only been two things she’d wanted. The dance, and Ethan Quinn.

“Damn, she’s the best thing that ever happened to you. I don’t just mean the sex, though that’s got to be part of what’s perked you up around here lately. The woman fits you like the proverbial glove.”

Her feelings for Ethan are mutual. The problem is Ethan believes he’s too damaged for someone as bright and pure as Grace.

There were shadows in those eyes that Ethan also recognized. The wounded recognized the wounded. He knew that Seth’s life, before Ray had taken him on, had been a nightmare. He’d lived through one himself.

“Sometimes it still comes back on me. Pain and shame. And the sweaty fear of knowing what’s going to happen.”

And between Ethan stubbornness and Grace shyness, they most certainly need all the help they can get (and that was funny).

“Not saying different. Just saying slow. Seen them moony-eyed over each other since before that boy got his own workboat. Has to be nearly ten years passed. Stella and I –bless her soul– had a conversation over it a time or two.”

“Rabbits,” he said slowly. “Probably.”
“Rabbits?”
“Yeah.” He shifted uncomfortably, wishing to Christ he’d at least gotten his pants on before she burst in. “Rabbits can be a problem with gardens. They just hop up and help themselves.”
“Rabbits,” she said again.
“Could be deer,” he added, just a little desperately. “They’d graze over and eat every damn thing down to stubs.” Counting on pity, he shot a look at Cam. “Right?” (LMAO!)

Seth is still in the heart of the story. Grace is the first woman, he truly trust and love and he has more things in common with Ethan that he thinks. The way he settles in his new life is thrilling as well as heartbreaking.

He didn’t want them to know he was waiting for them or that he was excited that they would be home any minute. But he was. He couldn’t understand why he was all pumped up about it. They’d only been gone a couple of weeks, and Cam was a pain in the ass most of the time anyway.

Seth grabbed his sandpaper and began to work furiously. And blindly. His eyes were dazzled, his heart in his throat. It happened whenever one of them referred to him as a Quinn.

Well, he was going to watch and he was going to see. He could still run if things got sticky. Though the idea of running made his stomach hurt in a way it had never done before. [...]
He’d discovered that the Quinn's kept their word. It was a new and wonderful concept to him, a promise kept.
If they probe it now, he knew it would hurt more than anything had hurt him before.

Glam's review of Sea Swept, book #1 of the series.