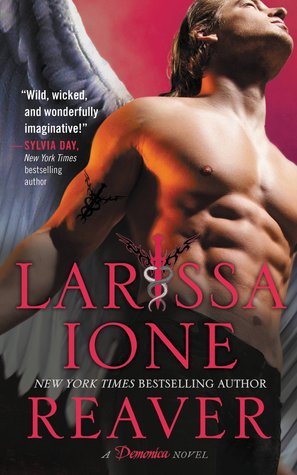 Reaver is an angel with a past, a record, and a less-than-heavenly attitude. Powerful enough to fight alongside the fiercest battle angels-and crazy enough to risk his wings on a one-way mission to hell-he's agreed to go where no angel has ever gone before...to steal the most seductive and dangerous prize of Satan himself.

Harvester is one of the Fallen, a once-heroic angel who sacrificed her wings to work as an undercover agent in hell. But now her cover has been blown, and she's been doomed to an eternity of agonizing torture. Even if Reaver can snatch her away from Satan's lair, even if they can fight their way out of the underworld's darkest depths, there is one thing Harvester can never escape-her newfound thirst for an angel's blood

I had a hard time rating this book.

One of the reason is that although I really like Reaver and his relationship with Harvester is interesting enough, my problem is that Reaver is a character that not only appears early in the Demonica series but also a lot of things happen to him since his first appearance. It's a problem for me because I have the feeling I would have enjoyed the book more if I had re-read both series before reading his story and my point is (even if I actually do a lot of re-read), you shouldn't have to re-read 9 books in order to fully savor a new instalment in a series.

Another reason is that I found the book uneven, with thrilling parts but also with dragging ones. If I liked most of the talk between Reaver and Harvester I also found the rescue part dragging and a bit too gore-ish at times.

I really LOVED the appearance of all the previous characters, horsemen as well as those from UGH but all the Raphael business made me roll my eyes, all the time.

Also, I thought that Reaver was the last instalment in the Lords of Deliverance series. I don't mind having another book if it's a good one, my problem here is that pretty soon in the book it was getting obvious that I was wrong.

Finally, I really liked the last part with Metatron.