Review: Falling for the Wingman by Crista McHugh 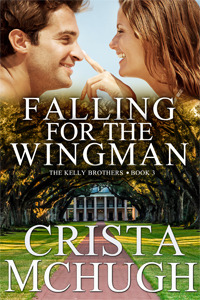 Falling for the Wingman

Air Force pilot Caleb Kelly has come back home with one mission in mind—to propose to the woman whose letters and lucky charm helped him survive his deployment in Afghanistan. But when he finds their apartment empty with a note saying she’s left him, he arrives at her mother’s house in rural Alabama less than a week before Kourtney is about to marry another man. Now he’s out to win her heart again and gets some unexpected assistance from her younger sister, Alex.

Alex Leadbetter has always thought Caleb was too good for her manipulative, social-climbing sister. She had assumed Kourtney’s identity to write letters to him and keep his spirits up until he returned home to the hard truth, never expecting to fall in love with him along the way. After he shows up in town, she convinces him that the best way to get Kourtney back is to make her think he’s fallen for someone new — her. But when a fake romance becomes all too real, her deception may leave them both grounded.

Sweet!
If I had one word to describe this book, that's the one I would use. Not in the urban slang sweet- as in cool, no no, I mean the kind of sweet that sugar coats your heart and makes you feel all smily and leaves a pink haze in your eyes.

The Kelly Brothers Series is fast becoming my cute and fluffy guaranteed fix for 2013.
I love McHugh writing, so each time I get my hands on one of her novels, I know that at that level I will be given joy. And Falling for the Wingman didn't disappoint. I love the dual POV and felt that their voices were quite unique. In fact to my utter joy I find each brother in each book totally different and so are their voices. Which is one of the pleasure about the series, besides the man-candy and the cute&fluffy, I am totally appreciating.

The Story line is SWEET. Yes, I am recycling the word- and let me warn you I will use it several times over.The story line is your typical falling for the wrong sister kinda romance. But this is a wonderful and very real feeling variation of it.
While Sweetest Seduction was set around the restaurant industry and Breakaway Hearts setting was around professional ice hockey -Falling for the Wingman was kinda set around cars. And I am saying kinda, because that's what Alex and Caleb both love. But unlike the first two novel, I didn't feel as excited about the background setting in this one. At first I thought I might have to do with the fact- that I have been involved in the fields of both previous novels and though I do love fast cars I do have to admit I don't know very much about them.. But thinking about it I came to the conclusion, that wasn't it. Somehow the cars took a way bigger back seat than the passions of the previous books. This was way more about the sisters than cars, which I found quite sad. I would have preferred it somehow the other way around.
The smut by the way was hot but definitely not my favorite in the series- better than the first one though- not so much insta-lust- but more.

Looking at the characters, I loved that Adam featured again and I did like Caleb in the first book- so it was great to read his story. He didn't disappoint. Alex was nice, but I did find her actually manipulative- I know it sounds bitchy considering- but she did deceive him, in the hope that he will discover her. So that leaves me wondering if lying of the right reasons is better than for what we think the wrong ones?
I did love Alex's circle of friends and how Caleb and her interacted with them. It felt real and realistic.
Found the bitch factor with sis a bit over the top - though in the end it was solved beautifully, which was more than redeeming for the series.
The way Alex and Caleb's relationship grew was probably more realistic than the previous two. And pleased to say there isn't much insta-love around, always a good thing in my opinion. By the end of the book, I felt like they had a solid connection and like I knew them quite well and understood them.
On an other note: I found this time around the mother less cliche, more real and I am looking forward to seeing more of her in future books.


All in all a sweet book. Yes, I used that word again. Told you I would.
If you feel like something sweet- or are in need of your cute & fluffy fix, this is the book for you.
Each of the sequels can work as a stand alone- but frankly, let me tell you, you wanna read ALL of them!

Falling for the Wingman did leave me wanting more! AND again it left me wanting to pick McHugh's brain.
But mostly it left me hoping that McHugh will write a book for EACH Kelly brother!