Review: Into the Storm by Susan Fanetti 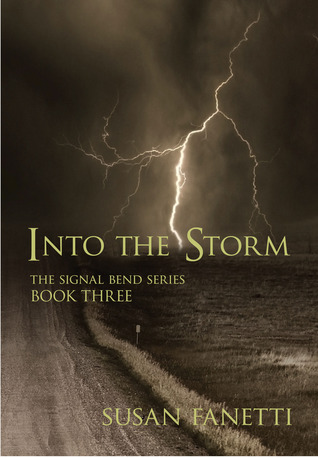 Signal Bend, Missouri survived a war on its streets and has arrived at a period of growth and peace. The town and its guardians, the Night Horde MC, relax into this moment of hope, looking toward the future for the first time in decades.

Everyone but Robert “Showdown” Ryan. Having suffered tremendous loss in that war, and taking on the burden of blame for it, Show has nothing left of himself. He is an empty husk of a man, drowning in grief and whiskey, seeking relief in numbness.

Shannon Bannerman has come to Signal Bend to manage the new Keller Acres Bed & Breakfast. She has left a successful city life to start anew in this tiny town, trying to keep the door closed on the regrets of her past.

Shannon is drawn to Show despite his stony detachment, and he is drawn to her despite his need to stay numb. But the pain in their pasts is deep and damaging. Only real love, like neither of them has ever known, could heal it.

First and foremost, I would like to say that I loved Show from his first appearance in Move the Sun. Unfortunately I can't say the same for Shannon. Show is Isaac best friend as well as right arm and horrible things happened to him in Behold the Stars and I think he deserved a better heroine than Shannon.

Action wise this book was quiet, we are in the aftermath of the big "showdown" in main street. And while Signal Bend is working on its reconstruction Show is trying to pick up the pieces of his life.

On her side Shannon comes with mystery, unfortunately after the revelation of her secret I found her reactions way OTT. To top it off, after all the drama the way the whole thing was packed off, kind of like the showdown in main street, was lame. I was like, what? All that drama for that? *shakes head*

Shannon personality and behavior set aside her relationship with Show was hot and it was good to witness Show awakening.