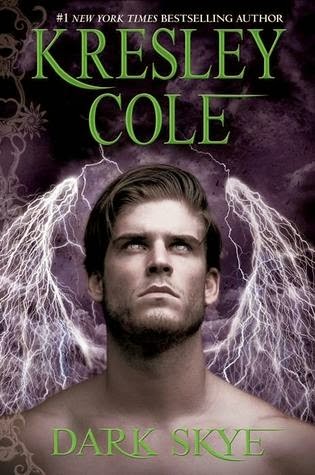 In this highly anticipated fifteenth novel in the Immortals After Dark series, #1 New York Times bestselling author Kresley Cole spins a sultry tale of a mighty warrior scarred inside and out and the beguiling sorceress with the power to heal him—or vanquish him forever.

As a boy, Thronos, prince of Skye Hall, loved Lanthe, a mischievous Sorceri girl who made him question everything about his Vrekener clan. But when the two got caught in the middle of their families’ war, tragedy struck, leaving Thronos and Lanthe bitter enemies. Though centuries have passed, nothing can cool his seething need for the beautiful enchantress who scarred his body—and left an even deeper impression on his soul.

Lanthe, a once-formidable sorceress struggling to reclaim her gifts, searches for love and acceptance with all the wrong immortal suitors. But she’s never forgotten Thronos, the magnificent silver-eyed boy who protected her until she was ripped from the shelter of his arms. One harrowing night changed everything between them. Now he’s a notorious warlord with a blood vendetta against Lanthe, hunting her relentlessly.

CAN THE HEAT OF DESIRE BURN BRIGHTER THAN VENGEANCE?

With their families locked in conflict and battles raging all around them, will Thronos and Lanthe succumb to the brutal chaos that threatens everything they cherish? Or will the fragile bond they formed so long ago spark a passion strong enough to withstand even the darkest doubts?

I'm a huge fan of the first 12 books of the IAD series. For me, things started to go sour with the first Dacians book and continued to go downhill with MacRieve (that promised so much). With this one I think that I'm definitely out of love with this series.

Before I start, I would like to say that after the epilogue in MacRieve, I didn't understand why the next one was about Lanthe and Thronos and not about MacRieve's twin since that's what the epilogue is about.

If I had to resume my review in one word, it would be B O R I N G

- Because of the too many mulling over thoughts/talks/resentments about the same themes. Damn but if it's something they are expert at it certainly is moving in circles. This alone suffices to bore me to tears.

- Then nothing much happens and the little that does happens are bad recycling of things already done and re-done or roll eyes festivals. The landing in the belly of a beast was done in Star Wars, to name the most obvious reference. Han Solo landed the Millennium Falcon and here they teleported themselves but it's the same thing, different mean. Same with the beast feeding them hallucinogens while digesting them alive. That one is an X-Files stuff. In the X-Files Mulder and Scully are the victims of a huge mushroom organism, but again, same thing, different mean. Dragons sitting on huge piles of gold... Rings a bell anyone? And so on...

I'm not against the recycling of used ideas or even clichés, but at least do it well and cleverly.

- The "blindness" of Thronos toward his brother's wrongdoings for centuries... I mean, really? He wasn't a recluse, they are neighbors on a tiny island and for most of these centuries they were close, and he never got the smallest hint that things weren't as they should have been? Is he dumb or dumber?

- If that wasn't enough, I couldn't care less for the heroes, and at time it was so sweet my teeth hurt. So yeah, boring.

The saddest thing is that even Nïx didn't manage to make things more interesting and with the little tidbits KC gave us, I'm more and more convinced that the following books are not going to get better.

This series is based on enemies become lovers with lots of adventure, and while it worked it was great but Kresley Cole obviously ran out of juices.

You can have the most beautiful pieces of fabric (which was definitely not the case here), without the thread to bind them, you'll never be able to have a patchwork quilt. Same goes with stories telling...