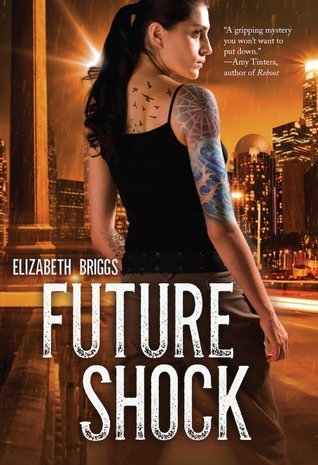 What do you do when the future is too late, and the present is counting down to an inevitable moment?

Elena Martinez has street smarts, the ability for perfect recall, and a deadline: if she doesn’t find a job before she turns eighteen, she’ll be homeless. But then she gets an unexpected offer from Aether Corporation, the powerful Los Angeles tech giant. Along with four other recruits—Adam, Chris, Trent, and Zoe—Elena is being sent on a secret mission to bring back data from the future. All they have to do is get Aether the information they need, and the five of them will be set for life. It’s an offer Elena can’t refuse.

But something goes wrong when the time travelers arrive in the future. And they are forced to break the only rule they were given—not to look into their own fates. Now they have twenty-four hours to get back to the present and find a way to stop a seemingly inevitable future—and a murder—from happening. But changing the timeline has deadly consequences too. Who can Elena trust as she fights to save her life?

WOW! What a rollercoaster!

I was totally captivated by the awesome plot.
Somehow Briggs always get me all caught up in her books. She does things big and dramatic. Her books aren't slow subtle kind of stories- nope it's all or nothing: fast, dynamic and captivating. Future Shock is in many ways very different than her previous novels, yet it does have that element in common with them. They all are plot driven.

And when it comes to plots, Briggs just out did herself with this one. There are quite a few twists and turns, and two I didn't see coming. Well actually, I kinda expected something, anything- But I would have never guessed the particular event.
The entire book happens over a span of a week- but so much happened, never a dull moment. All the guessing kept me occupied, but so many things did unfold as well.
The most amazing thing however, I didn't only get to know the MCs during this adventure. They all had some pretty interesting character growth as well.

The entire book is written from Elena's POV. And to be frank I wasn't a huge fan of her in the beginning. I found her melodramatic, which is totally unfair, considering her situation. But she was just so poor me, everything is so unfair, yet also so agro. She kinda went on my nerves.
Then we get to meet her companions: Trent, Chris, Zoe and Adam.
Each of them bringing a different skill to their mission, or at least that's what we were told. It started off with rather typecast characters and as time goes one, we get to know them and they slowly slowly become this unique group of youngsters.
The most changes we get to see in Elena, some of her changes in fact were choices that effected the outcome of the story- which is beyond clever IMO. And at the end I realised I totally can identify with her, I care for her and I really like her. Pretty amazing considering that I thought she was totally annoying about 10% in.

I am still reeling from the book. I actually didn't really expect this. I don't exactly know what I expected, but not this. I think I kinda expected something more paranormal. I ain't complaining however. I like the idea of time-traveling stories, the question if we can change the future and the mystery of the storyline had me guessing right until the end.


Great concept and captivating plot make this an enjoyable read.
And now all I can do is wondering where Briggs will take the story next!