Review: Pieces of You and Me by Erin Fletcher 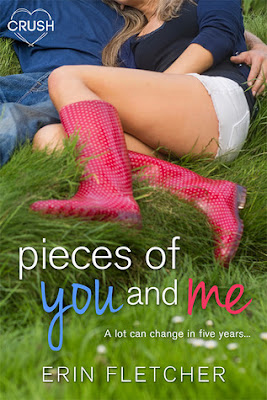 Pieces of You and Me

Disclaimer: This Entangled Teen Crush book contains references to drinking, addiction, and just the right amount of angst. You’ll want to save this tortured hero, while at the same time, not want to change a single thing about him!

That’s how long I’ve been gone. Since I left my best friend—the girl I loved—behind.

That's how long it takes to realize I am completely, utterly, screwed. Because now that I’m back, my childhood crush has turned into so much more.

Rylee has changed. We both have. And now I’m drawn to her in a completely different way. To her smile. Her touch. To reliving old memories and making new ones. To the happiness she’s always given me that I haven’t felt since I left.

But her friends are hell-bent on keeping us apart. My dad is one drink away from destroying both of our lives, and maybe I am, too. It’s only a matter of time before I have to leave again, and there’s nothing I can do to stop it. I never get a choice.

The one choice I can make? Stay away from Rylee. Because if I don’t, I’ll break her heart—and mine—all over again.

So the Blurb had it just right... Exactly right. I didn't want to change anything about Chase.
Totally the desirable tortured hero.
Well, until at about 85% that is then. I just wanted to smack him.
But let's backtrack and start at the beginning.

Just like Fletcher's previous novel, I enjoyed her writing. She is great at writing unique special moments and even better at writing about tortured heros.

As I already said I loved Chase. I felt for him, and with him. His love for art was beautifully described, his lethargia was well described and somehow understandable. The way he got away with things, was scary in that it is realistic, sadly. But there was no character growth until the last chapter. He was so tortured so caught up in his own fears- which by the way most of it was only hinted at, there are still a gazillion questions I was just left with. All we are told: 5 years ago he was this sweet nerd, now he is a tortured misfit. How he got from the first to the latter, we only got fed tidbits here and there.
Rylee being his polar opposite today, was his best friend during their nerd times... Now she has a group of friends and seems pretty popular. While I did like Rylee most of the time. Actually to be honest I liked the Rylee that was with Chase. I didn't much care for her action around her friends.
The fact that she didn't tell them about her nerdy-side for example struck me as odd. But more so that she didn't stand up for what she wanted. It annoyed me like hell. I kept thinking they supposedly her friends, but Mya acted half the time more like a mother hen and the other half Rylee acted like if she'd be honest they would all desert her.
I did like the support cast. Even if I found some of them a bit too much. I loved the parents of Chase, their disfunction and lostness, was upsetting but I love how Fletcher made them so human.

The plot had some amazing moments. I loved the notebook. I loved the skateboarding... lots of good moments. BUT it was too short, or actually things changed suddenly and all seemed fine. The End.
There was this great build up, then the slight disappointing big bang and well, a minute of groveling, and HEA. It was just too fast. Considering all that had happened before. All those hints, all the problems and then it was just, ok now all is good. It my biggest issue with the book. The last 15% felt rushed. It's like Fletcher just decided to call it a day. It was a bit anticlimactic but also rather disappointing. I expected somehow more. And I still feel like there should have been more. Fletcher did an amazing job at setting things up, making me wonder what exactly drove Chase, but the it all unraveled way to speedy and we are left with loads of questions and well hoping that Fletcher is publishing another book soon. It lacking the depth it was setup for.


A good cute & fluffy, that was sadly too short and a wee bit rushed at the end.